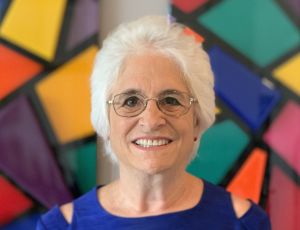 Artist Lenore Diamond Robins was born and raised just outside of Philadelphia, along with her younger brother and sister. Her father was a psychiatrist and her mother a social worker. With that combination, it’s no wonder her artwork is distinctive and different!

She graduated with an AB degree from Cornell University and then earned an MBA from The Wharton School of the University of Pennsylvania. Upon completing her studies, she accepted a Hospital Administration position with Hospital Corporation of America and moved to West Palm Beach. That was a huge change for her as she had never even visited Florida beforethe job interview. Lenore thought she would be in West Palm for two years, gaining some real work experience, and then returning to the Northeast. Life, however, had other plans. She met her future husband in Florida, was promoted to two other Florida hospital administration positions over several years, before leaving to start a family. After her daughter was born, she began looking for new ways to be creative and productive.

Lenore started looking for artwork for her home, but ended up wanting to make it herself. Her early pieces were made of cloth, paper and finally, wood. Working with wood came quite naturally. Her great-grandfather was a master carpenter who built fabulous large furniture (dining table that could seat 18! Matching server, buffet and china cabinet – all of which were in the dining room in her childhood home). The walls of her home became her gallery. Friends who visited encouraged her to show and sell her art.

That encouragement led her to the local outdoor art circuit for several years. However, sitting out in the South Florida heat for two or three straight days was a challenge. Then she discovered The Artists Guild of the Boca Raton Museum of Art had a gallery for local artists. She began to show her art at the Guild Gallery and became very involved with the organization, ultimately being elected President and helping to grow the organization from 225 members to over 500! Never having taken formal art classes, she eagerly listened to the constructive criticism of other Guild members. Her art evolved and improved dramatically, focused on three dimensional geometric abstractions.

Lenore now works almost exclusively on wood, using acrylic paints and finish coating with a high gloss resin which is hand-mixed, hand-poured and blow-torched to remove bubbles. It’s a challenging process, which is well worth the effort as it creates a very beautiful finish. Her completed artworks actually seem to be made of glass, rather than wood. Her three dimensional wall pieces hang without commercial frames, a concept integral to her design esthetic.

While Lenore’s technique is consistently utilized for all of her original works, she creates in a number of different design styles. Her designs are based upon geometric influences, using raised shapes at differing angles to create a strong sense of motion. Some of her art pieces are black and white color studies with pops of color for accents. Some pieces have stylized fish and flowers using geometric shapes to create the images. Some aregiant puzzles in a variety of sizes, styles and colors. She also creates work she simply defines as “Just Having Fun”. Her art has been described as “Pop Art the really pops!” This description is readily understood by anyone who has seen her original art.

Lenore’s original artworks have been purchased by collectors from many parts of the globe as well as the US and Canada. She is represented by several galleries across the country. Lenore is excited and honored that her art is on a World Tour, a joint venture of Art Fusion Galleries in Miami and Abba Gallery in Florence, Italy. The tour included an exhibition at the Metropolitan Art Museum in Tokyo, Japan, among other prestigious venues. The tour is on hold now, due to Covid-19, but is expected to resume as the world recovers.