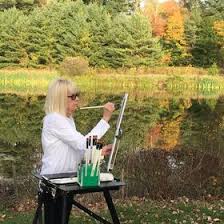 Dannielle Mick creates works of art in all mediums. Her art is inspired by the natural world, featuring sea, sky, and landscapes. She likes to maintain a sense of simplicity and finds beauty in every day surroundings

Dannielle is an internationally recognized, award-winning, professional artist and art educator. She has been teaching students of all ages for more than thirty years. Since 2009, as owner and director of Lakeside Art Studio in Parsippany, NJ, she has taught and inspired thousands of students to develop their creative potential.

Dannielle has exhibited at the U.S. Embassy in Uzbekistan (as part of the Federal Art in Embassies Program), the International Pastel Artists Invitational in Taipei, Taiwan, and the National Arts Club and The Salmagundi Club, both in New York City. Her work has appeared in Pastel Journal Magazine, Southwest Magazine, and The New York Times. She is a past president of the Pastel Society of New Jersey and on the past board of directors for Audubon Artists, Inc. in New York City.