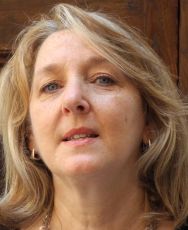 Nancy Crandall Phillips, born in Washington, D.C. spent most of her childhood in the D.C. area. She lived for several years in Lima, Peru where her father was with the Foreign Service and family vacations were spent exploring pre-Columbian ruins. Upon returning to the U.S., she was most often found in her high school’s ceramics studio, she then studied fiber and fabric design while an undergraduate at the University of Maryland.  All these experiences clearly inform her current work.  She continued to study ceramics, drawing and printmaking while working in the interior design business, and in 1987 moved to southern California to pursue her art career.   She studied painting and drawing at Art Center College of Design in Pasadena and earned a Masters degree from California State University, Northridge in 1992.  Since then her work has appeared in a variety of galleries and juried exhibitions across the country including the Art Rental and Sales Gallery at the Los Angeles County Museum of Art, Circle Gallery in Annapolis, Maryland and Cortile Gallery in Provincetown, Massachusetts.  She and her husband James Crandall (also an artist) moved to the Sierra foothills in 2006.

My work has always been about the interaction of process and materials over time, perhaps influenced by my exposure to ruins and ancient artifacts in South America. Part painting, part assemblage, layers of translucent tissue, paint, foil and fabric are woven together on a plasterlike surface, leaving hints of the process of its creation. More recently I’ve begun adding encaustic (hot pigmented wax) to my work. It’s both translucent and fluid, like moving water that both obscures and reveals what’s underneath. As in archaeology, the notion that the history of an object can be read upon careful inspection of its surface has always been an underlying theme in my work.