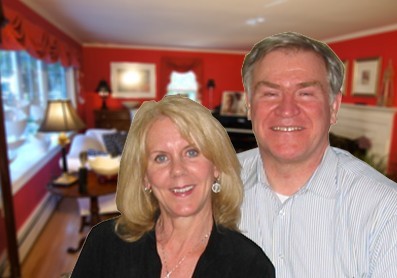 We are Lois Jean and William Elton Barker, a husband and wife team that combines our middle names to produce our studio name “Jean Elton” — being convinced that that name is more “artsy” than the “Bill & Lois Pottery Company”. While the company using that name wasn’t started until later, we began our mostly self- taught odyssey in ceramics in 1973, where I (Bill) was stationed in the US Army at Fort Sill, OK, and we began to explore the on-base ceramic shop.

Early History:
The couple began their joint love of working in clay while William was stationed in the US Army at Ft Sill, Oklahoma in the early 70’s, where both took classes during off-work hours from a recently graduated MFA who loved teaching wheel – throwing. During these years, the couple also studied informally with a professor of ceramics at a local college and exhibited their work at the Quadrangle Gallery in Dallas and museums and galleries in numerous locations in the American Southwest.  Assigned next to three years in Germany, the couple studied Wilhelm & Ellie Kuch, visiting their studio often and working with their apprentices. Upon returning to the States in the late 70’s, the couple owned and operated the Jean Elton Gallery in Quechee, VT, which featured their own ceramics and the work of a local photographer, among others, who later credited Jean Elton for discovering him at a show at Dartmouth College’s Hopkins Fine Art Center. While living in Hartford, CT during the early 80’s, Lois studied ceramics at the University of Hartford, where she developed the “disk” forms that influence some of her work today. Later, while living in Northern Virginia, the couple attended, participated in and filmed a workshop with Paul Soldner at the Corcoran School of Art.
Of the two , Lois is the artist. Her first expressions of design were in home decorating, starting when she was a teenager who loved to rearrange paintings, furniture and other decorative objects in her parents’ home (sometimes to their frustration). Today, she awakens in the morning eager to get to the studio, often with a fresh design idea. She loves creating designs on clay shapes, always imagining them in a lovely home where they help create an ambience that encourages rich interaction among people and their modes of expression.
Bill is a semi-retired businessman who once won a contest for the most unusual summer activity of New York City businessmen when he said he would be making plaster molds for his wife’s ceramic art business. More the design engineer of the two, he works with Lois to bring new shapes to fruition through plaster modeling and die-making.