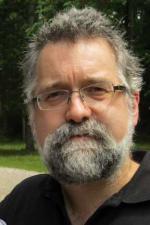 Brian Russellʼs artistic endeavors began in the late seventies when he started exploring black and white photography. Concentrating on the human form Russell pursued photography as his primary expressive medium until his introduction to sculpture in 1981. Under Lawrence Anthonyʼs instruction at Rhodes College, Russell began to be fascinated with what his hands could create. Beginning with wood and stone carving, he soon progressed to fabricating large freestanding sculptures from scrap steel and industrial debris.

Russell spent the year after graduating from Rhodes fashioning welded sculptures in his motherʼs backyard. At this time he began also to build furniture, both of wood and of steel. Furniture and functional items provided capital for the establishment of his ﬁrst studio in midtown Memphis in August 1985. Shortly after starting this business, Russell became aware of the creative possibilities of working with hot forged metals. Using the tools and techniques of traditional blacksmiths allowed the shaping of metal into forms matching his creative vision. For the next nine years Russell worked in his studio on Broad Avenue, building everything from ﬁre screens to monumental gates, from sculpture to lighting. Mastering new techniques and materials stimulated his creative vision, each new work allowing a synthesis of ideas. Driven to incorporate color into his work, Russell began experimenting with fused glass and pate-de-verre. Initially focused on glass vessels and ﬁxtures, Russell laid the foundation for subsequent mixed media sculpture. His visual vocabulary was derived from his travels, nature and the human form.

In 1994 Russell moved his studio to 15 acres in the countryside northeast of Memphis. During the next six years, Russell produced an exceptional volume of work, including four commissions for monumental architectural sculptures. Satisﬁed with his mastery of forging technique, Russell began to leave the more linear forms driven by blacksmithing and to expand his vocabulary to include more color and volumetric shapes. In 1998 Russell decided to reintroduce glass into his work in a more sculptural way Using a scientiﬁc approach, and with much experimentation and patience, Russell was now able to realize his vision of combining glass and metals to create new expressions in his work. Still, the techniques of fusing lacked the crisp sculptural qualities he desired.

On a visit to New Zealand in 1999 Russell was exposed to a lost wax glass casting technique that produced exciting results. Two more years of hard work and research resulted in the current state of Russellʼs art: a fusion of forged metals and cast glass unique to his sculpture. A conﬁdence in technique and agility with materials now allows him to fully exploit his creative talents. The transparency and optical nature of the colored cast glass have an inherent emotional effect that enable the artist to speak quietly, yet powerfully about his ideas on the nature of reality and purity of form. The effect of the metal forgings, synergized with the images presented by the vivid glass castings give life to his sculptures.

Since 2004 Russell has been working once again with formed and fabricated sheet bronze forms, as well as forged aluminum. The bronze shapes ﬂow smoothly into the glass castings, giving the effect of unity. The metal work gives scale and structure to the glass. 2006 dawned with new explorations into adhesively joining pieces of glass, thus further enlarging the repertoire.